September 19 is Talk Like a Pirate Day. It’s fun and easy and a little bit weird (that’s a good thing) – you just try to talk like a pirate.

Step 1: Greet people with “Ahoy!” If the inventor of the telephone got his way, this is what we’d be saying every time we answered it.

Step 3: Growl a lot. Say all the regular things like a grumbling, rumbling animal…or like someone who has been stuck on a boat with no microwave oven, no television and *gasp!* no showers for a couple of months.

Quite seriously – we love Talk Like a Pirate Day. The American “R” sound is one of the hardest for English Language Learners to master, and being in Boston doesn’t help since locals often drop it, too! Some experts think the pirate accent comes from an actor who was cast as a pirate in several movies. He used the accent from southwest England, where many pirates in English history came from. You can also hear a strong R in Irish speech, but many other regions and many other languages give that letter a different sound. So today’s fun “holiday” is a great opportunity to practice this tricky bit of American English.

We’ve got pirate books on the yellow bookshelf:

Posted in Activities at Home, Just For Fun, Reading

Comfortable, casual conversation is one of the hardest skills to master when learning a new language. All the workbooks in the world can’t prepare you for the sudden changes in topic, the use of slang and idioms, or just the personal choices your conversational partner might make. Unlike when you’re reading, you can’t always pause a conversation to go look up a word in a dictionary (but when possible, try to ask the person you’re talking to what they mean). And since casual conversation is important for all students, children and adults, to feel like they are fitting in to their new community, we urge our students to take every chance to practice. 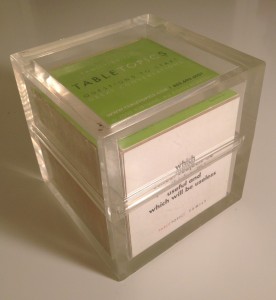 Our copy of Table Topics is getting as well-used as our dictionary!

This is why families and friends are so valuable: they already know you are not perfect but they still like you! If you make a game out of your conversation with them, mistakes become part of the fun.

In our classrooms, we have a game called Table Topics. We use the family edition so that the questions are always child-appropriate, and even adults can laugh while answering child-focused questions like, “What do you want to be when you grow up?”

Family dinner is a good time to use this game. Some questions have simple, one-word answers, but when people are comfortable they can spend time explaining why that is their answer. You can answer questions in English to practice the language, but even discussion in your home language will help children practice the thinking skills that they need to learn and use English. Be silly, don’t be perfect, and maybe you’ll learn something new about the people you love!

Posted in Activities at Home, Just For Fun, Resources

Now for a little silliness…

September 19 is “Talk Like a Pirate Day.”  No, you don’t get the day off from school or work.  It’s not that kind of holiday, I’m afraid.  It’s just a day of silliness and fun.

Here are some rules for talking like a pirate:

Here are some websites for Talk Like a Pirate Day, both American (especially for kids) and British.

In our classrooms, we have several pirate books:

So when you see your friends today, yell (if you’re outside – pirates spend a lot of time outside): “Ahoy, me mateys!  Be ye talking like pirates, too?  Arrrr!”

Posted in Just For Fun