Boston Book Fest is this weekend!

Posted on October 23, 2015 | Leave a comment
Boston Book Fest is this weekend. I’ve gone for the past four years and loved it every time. There are amazing author panels, kids activities, food trucks, and a crowd of people who love books. After the presentations, authors are usually available to sign their books. When the crowds get to be too much, I find a seat in the Boston Public Library’s courtyard (I hope it will be warm enough tomorrow) with a snack and a notebook, and write down all the inspiring thoughts that are buzzing around my head.
Because of my work as a tutor – and because I love children’s literature best of all – I tend to focus on the kids’ and teens’ activities. This year, Louis Sachar and Libba Bray are presenting at the same time and I can’t figure out which presentation to go to. Help!

September 19 is Talk Like a Pirate Day. It’s fun and easy and a little bit weird (that’s a good thing) – you just try to talk like a pirate.

Step 1: Greet people with “Ahoy!” If the inventor of the telephone got his way, this is what we’d be saying every time we answered it.

Step 3: Growl a lot. Say all the regular things like a grumbling, rumbling animal…or like someone who has been stuck on a boat with no microwave oven, no television and *gasp!* no showers for a couple of months.

Quite seriously – we love Talk Like a Pirate Day. The American “R” sound is one of the hardest for English Language Learners to master, and being in Boston doesn’t help since locals often drop it, too! Some experts think the pirate accent comes from an actor who was cast as a pirate in several movies. He used the accent from southwest England, where many pirates in English history came from. You can also hear a strong R in Irish speech, but many other regions and many other languages give that letter a different sound. So today’s fun “holiday” is a great opportunity to practice this tricky bit of American English.

We’ve got pirate books on the yellow bookshelf:

Posted in Activities at Home, Just For Fun, Reading

Back To School: September’s Yellow Bookshelf 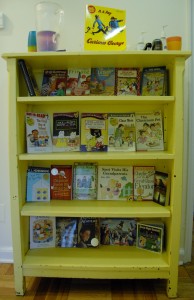 The yellow bookshelf is ready for back-to-school.

Our back-to-school books are up on the yellow bookshelf, along with other books celebrating special events which happened in September. Students who are starting school in the US for the first time may especially benefit from seeing the similarities and differences (mostly similarities!) between the school they were in before and the typical American school.

For beginning readers, books include:

Cradle Me by Debby Slier

This board book has several features which earn it high ratings and a place in my ESL classroom: It features photos of children in their cradleboards from almost a dozen Native American nations. The first page encourages readers to say each word (smiling, thinking, sleepy) in their own language. The words themselves are state-of-being words that help beginning students with self-expression and communicating needs and wants.

Perhaps most importantly: although this book is clearly a celebration of an education about Native cultures, it does not separate them from every other culture’s life. Many of my ESL students (and perhaps too many US-born students) think that Native American cultures are a thing of the past, not a part of the world today. Books that focus on the historic contributions of Native Americans, while having an important place on an educator’s bookshelf, may also accidentally help perpetuate that belief. The approach of Cradle Me is an important balance, showing readers from all cultures that Native American children are important simply as children, with both modern lives and long-standing traditions, children who can be happy or sad or thoughtful, without always being a monolithic group who spend their time showing Europeans how to grow food or find the Pacific Ocean. Instead, choosing one thing many cultures have in common also allows readers to see the differences between them.

Count the Monkeys by Mac Barnett

Hooray for Mac Barnett, whose varied styles mean there is surely something among his books to appeal to each child. As a sneaky teacher, I can then get my students to read more broadly by saying, “You loved that book by Barnett? You might like this other [completely unrelated] story he wrote…” This one is more hyper than my beloved Chloe and the Lion, yet marginally more sane. Marginally: we’re still talking a book that incorporates king cobras, beekeepers, and surprisingly few monkeys.

Each page directly advises the reader on interacting with the subjects – move slowly around snakes, zig zig away from alligators, etc. Some of the wildlife advice seems more folklore than science, but having had a spate of students afraid of nature this past year, I appreciate a book which supplies them with a way to exercise control over their environment without explicitly mentioning danger. For the majority of students, however, these pages will just be outright silly – can you turn the page while your eyes are covered?

Kevin Cornell’s bright illustrations (Dear Disney-Hyperion, please include illustration information in your colophons; they are quite interesting to your young readers) have a movement and a weight which go well with Barnett’s text. I found myself strangely fascinated by the variety of lumberjack noses, and it is just that kind of random interest which can make a book loved by a child.

Let’s be clear right now, because I don’t want you confused by the charming blue bird on the cover into thinking that this is a beginning vocabulary book. No, this is a Lemony Snicket book. That means that after “teaching” us the word bird, we are confronted with the second word: Despondent. The bird is despondent. Too much, too soon? Okay, Snicket backs off and gives us cake and dog. However, the reader would be wise to listen to the little voice telling them that words like haberdashery and panache are lurking around the corner.

Maria Kalman’s brightly surreal art is a perfect match for Snicket’s prose. There is something in-jokey about the illustrations and I found myself searching in vain for figures from American Gothic or the Boy in Blue. The bizarre characters leaving you feeling like anything is possible in this world, and isn’t that great?

Would the art be quite so appealing to a young reader? That is my fear with primitive styles where perspective and proportion are shifted in a way that appears to be an imitations of a child’s painting. It is the right choice for this world where a bird must paint eleven ladders ten colors, but it leaves me wondering if this is one of those books that adults will appreciate more than children do. Snicket’s writing always has humor designed to particularly appeal to adult readers, but I simply don’t know if this one has the kid-appeal to match.

Book Review: 31 Uses for a Mom

Next Sunday is Mother’s Day; here’s a funny little book about those special women.

31 Uses For A Mom by Harriet Ziefert

An excellent book for adult ESL students, this is simply a list of things a mother might do for her children. With just 42 words, students can look up every single unfamiliar word if need be – and those words are not just basic vocabulary. The book’s brevity will also allow readers to take some time to figure out the moments of humor that a native speaker may spot instantly. Finally, it is a nice detail to match the number of days in May, the month of Mothers’ Day.

Next Thursday is Thanksgiving and the Macy’s Parade will be broadcast across the country.  This picture book tells the fascinating story of the parade’s beginnings.

Balloons over Broadway: The True Story of the Puppeteer of Macy’s Parade by Melissa Sweet

Growing up with Macy’s Thanksgiving parade, the balloons were special because they were soooo big and because they were familiar old friends returning once a year. Melissa Sweet, however, brings a new sense of wonder to the story: how did someone even come up with the idea? It was not as simple as enlarging balloons, as I had assumed; instead, in a way, they are marionettes flipped upside-down. Now that’s the kind of creative solution I want my students exposed to.

When thinking about the experience of a child reader, furthermore, Sweet includes the usual childhood vignette well. The main of the book is about play, so why not discuss the work that balloon-creator Tony Sarg had to do as a child? There is also an realistic immediacy to a child’s successful effort to get out of doing his chores that more common and more didactic “he studied hard and one day grew up to be…” lacks.

The illustrations’ pastiche reminded me simultaneously of two recently-reviewed picture books: Paul Thurlby’s Alphabet and How the Dinosaur Got to the Museum? Sweet, like Thurlby, uses vintage paper to set a literally background mood. She uses other bits of vintage and contemporary flotsam to capture, as did Jessie Hartland, the chaos of creativity so convincingly that I half expected to have to rip apart a couple of pages, as if Sarg’s glues and paints had stepped right out of the pages.

Finally, it contains the best pronunciation guide ever: “Sarg rhymes with aargh!”